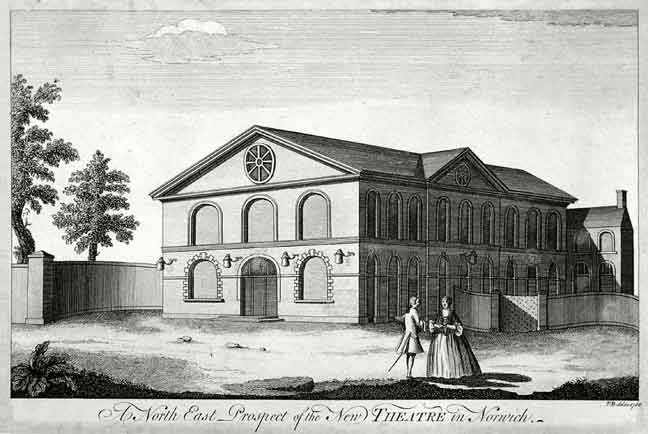 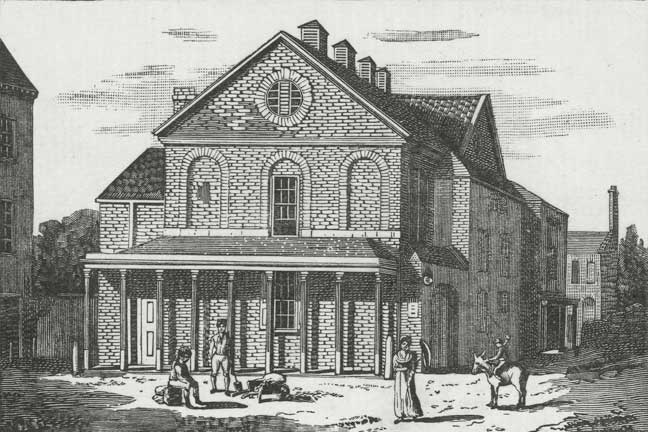 The theatre in 1805. after the renovations and the addition of the colonnade. 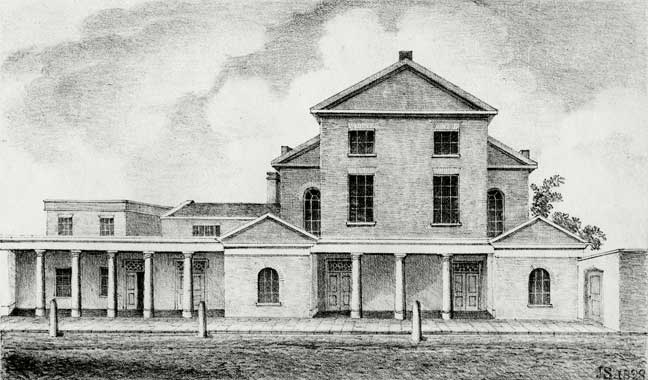 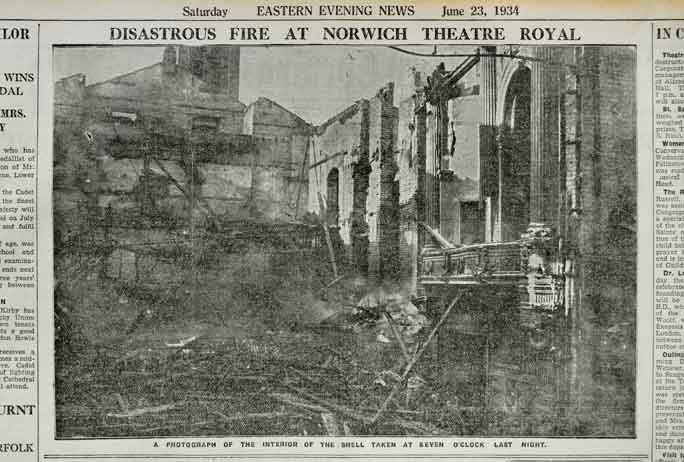 The Eastern Evening News reported the fire with this photograph of the smouldering ruins.

The history of theatrical performance in Norwich can be traced back to late medieval times, when mystery plays would be enacted by the local tradesmen's guilds. Religious in nature, they were performed on highly decorated stages wheeled into the city centre during the major Christian festivals throughout the year. By the late seventeenth century troupes of strolling players would travel the country from one town to another, usually arriving with sufficient noise and fanfare to announce their presence to the locals, to whom they would sell tickets for their performances. They would frequently visit Norwich, at the time the second largest city in England, and present their plays, by now much more secular in nature, at several of the city's inns. By the early eighteenth century some of these troupes had established their headquarters in major towns or cities and limted their travels to other towns and villages of the local area. In Norwich, one such troupe, later to be known as the Norwich Company of Comedians, established their base at the White Swan Inn, between the church of St Peter Mancroft and what was to become the site of the present Theatre Royal.

In 1757 the local master builder and architect, Thomas Ivory, who just two years previously had completed the building of the Assembly Rooms close by, commenced the building of a new theatre, to be called The New Theatre near Chapel Field. As its sole proprietor he persuaded the Norwich Company of Comedians to leave the White Swan and take up residence at his theatre, which first opened its doors on the 31st January 1757 with a performance of the William Congreve comedy, The Way of the World. Technically, the theatre was operating illegally, however, as theatrical performances with an admission charge had to be licensed, and at the time licenses were granted only to theatres in London. To get around this it was soon thought prudent to change the name of the new venue to The Grand Concert Hall, and to present the plays free of charge during the intervals between the paid-for musical performances. This dubiously legal work-around was to become no longer necessary in 1767, when Acts of Parliament were passed to allow licenses to be granted to theatres outside London. The Norwich theatre received its license by royal assent on 17th March 1768, and was the second provincial theatre in England to do so, having been pipped at the post by Bath just a few days earlier. The new theatre was given the name still used today – the Norwich Theatre Royal.

The building required lots of maintenance, however. It was heated by coal fires, the chimneys to which required frequent cleaning, and smoke from the fires and the oil lamps used for lighting necessitated frequent redecoration. There was also an issue of safety, as the exits from the gallery and the boxes were narrow, and it was feared there would be casualties if members of the audience were unable to leave the building sufficiently quickly in the event of a fire. In 1801 the interior of the theatre was completely rebuilt by William Wilkins, also a builder and architect, who had recently taken on the lease of the building. The entrances were widened and other improvements were made to the exterior, including the construction of a colonnade along the front of the building to offer cover to patrons awaiting their carriages after the show.

Nothing would stop the gradual deterioration of the fabric of the building, however, and by the 1820s it was clear that an entirely new theatre was required. By this time William Wilkins had died, and his son, also named William and later to be the architect of London's National Gallery, proposed plans for a new building to be built a short distance from the old, on the site of the present Theatre Royal. The plans were accepted and the new theatre opened on Easter Monday 1826 with a performance of Sheridan's The School for Scandal.

A little over one hundred years later, on the afternoon of Friday 22nd June 1934, disaster was to strike. A cashier in the box office heard an unusual noise coming from within the theatre, and upon entering the auditorium immediately smelled burning and saw flames licking at the base of the safety curtain. A fire had started beneath the stage, and despite the rapid arrival of the fire brigade the building could not be saved. The then owner, Jack Gladwin, pledged his intention to rebuild, and a new theatre, now the third, opened on the site of the old on 30th September 1935 with a performance of the popular musical White Horse Inn.

By the mid-1950s, in the period of relative austerity following the Second World War, provincial theatres were struggling to fill sufficient seats to keep afloat, and the Theatre Royal was no exception. It was a vicious circle – poor ticket sales meant the theatre was unable to afford the best touring companies with their popular West End productions, which in turn led to even poorer ticket sales. In 1956 the theatre was leased to and subsequently purchased by the Essoldo cinema chain. Essoldo made no investment in the building and, in 1965, after a further period of poor returns as a result of only showing films interspersed with occasional live performances, they applied to Norwich City Council to run the theatre as a bingo hall. The application was refused and two years later the council purchased the theatre and subsequently established a trust to run it.

In 1972 the Theatre Trust engaged the services as manager of Richard ‘Dick’ Condon (1937-1991), the Irish impresario and former general manager of the Olympia Theatre in Dublin. A self-confessed workaholic, Condon strived tirelessly to turn around the theatre's fortunes. He first set about persuading leading companies to come to Norwich for less than their usual asking price and followed this up with a colourful advertising campaign which succeeded in attracting sufficiently large audiences to return a decent profit. Within a few years he had transformed the theatre into one of the most highly acclaimed in England. In 1977 he converted the Victorian Sunday school hall, just across from the theatre's stage door, into a small studio theatre in which he subsequently introduced theatre arts courses for people of all ages. In 2015 the old hall was demolished and replaced with Stage Two, an ultra-modern, purpose-built learning and participation centre which, with a 100-seater auditorium, is home to the Theatre Royal's own junior theatre courses, adult drama workshops and other theatre-related activities.

Today, Norwich Theatre Royal is one of the leading provincial theatres in the country. With seating for 1300 it is the largest theatre in the East of England and puts on typically 400 performances per year, including children's shows, West End musicals, ballet, opera, dramas, comedy and an annual Christmas pantomime.

To visit the official Theatre Royal website, which contains a detailed history of the theatre, please click here.

The theatre in 1805, after tne renovations and the addition of the colonnade.

The Eastern Evening News reported the 1934 fire with this photograph of the smouldering ruins.

The theatre in 1805. after the renovations and the addition of the colonnade.

The Eastern Evening News reported the 1934 fire with a photograph of the smouldering ruins.