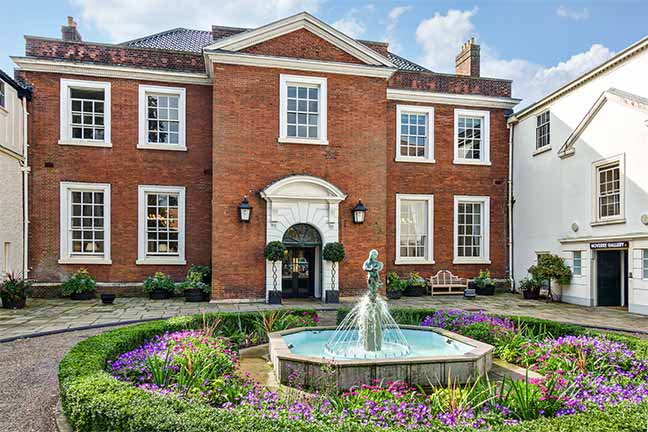 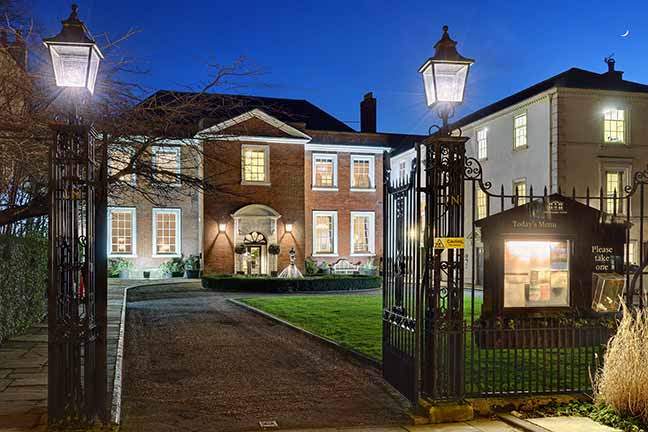 ‘ Norwich can be proud of its Assembly House. No other town of its size in England has anything like it except of course for a spa like Bath.’

Thus wrote Sir Nikolaus Pevsner in The Buildings of England.

The Georgian façade and stunning interior of the Grade I listed Assembly House offer little indication of the history of the building or of the site on which it stands. In 1248 a gentleman named le Brun left each of his three sons four acres of land. One son, on his plot situated in what was then open fields just to the south west of Norwich market place, built a hospital and chapel which he dedicated to the Blessed Virgin Mary. Subsequently the buildings were extended with a cloister and a crypt, and the Chapel and Hospice of St Mary in the Fields became a college for secular priests. With the Dissolution of the Monasteries in the reign of Henry VIII the college was closed. The buildings were surrendered to the crown and the chapel and cloister destroyed. The remaining buildings were granted to the college dean, Dr Miles Spencer, to be used as a private residence. After Spencer's death in 1569 the buildings were sold to Sir Thomas Cornwallis, who began converting them into a fine town house. In 1609 his son sold ‘Chapel of the Field House’ to Sir Henry Hobart, MP for Norwich and Attorney General. A few years later Sir Henry was to buy the old Boleyn manor some fifteen miles north of Norwich and there commence the building of Blickling Hall, a property now owned by the National Trust. Over the coming decades the Hobart family, with their seat firmly established at Blickling, were to use the house in Norwich less and less, and in 1753 it was leased to seven aldermen of the city who, with others, established a business for the running of the house for use for assemblies, plays, concerts and other entertainment, including the playing of card games and bowls.

In 1754 the proprietors engaged the services of the local architect and builder Thomas Ivory, who was also working on the Octagon Chapel in Colegate, to rebuild the house. It is his work which we see today.

By 1755 the Assembly Rooms, as they were then known, were in full use and over the following decades prospered as a popular venue for the local gentry, hosting frequent meetings, concerts and dances. In 1805 a Grand Ball was held to celebrate Admiral Nelson's victory at Trafalgar. In 1825 Madame Tussaud presented an exhibition of her waxworks, and in 1840 the Hungarian pianist and composer Franz Liszt gave a concert in the Music Room.

By that time, however, the once prosperous textile trade in Norwich had been in decline for some years, and this, combined with the coming of the railways, which allowed the county and city gentry to more easily travel to London, led to a fall in the popularity of the Assembly Rooms as a venue. In 1856 the Marquess of Lothian, whose family had acquired the Hobart estate by marriage some years earlier, sold the freehold of the Assembly Rooms to a Mr Cabell of Cromer Hall. Cabell was a leading figure in Freemasonry in Norfolk, and for some years he allowed the local Masonic lodges to use the Assembly House free of rent. On his death the property passed to his nephew, who sold it to the Girls Public Day Schools Trust, following which it became the home of the Norwich High School for Girls until the school moved to larger premises off Newmarket Road in 1933. Subsequently the school trust drew up plans to demolish the Assembly House, but it was saved by the intervention of the Norfolk and Norwich Archaeological Society and the recently formed Norwich Society, which only a few years earlier had saved Elm Hill from a similar fate.

In 1938 the Assembly House was bought by local shoe manufacturer, Mr H J Sexton. Plans to expand the property for use by the YMCA and YWCA were interrupted by the start of the Second World War, during which the house was requisitioned by the War Office to be used as the base for the Eastern Region Camouflage School, under the leadership of the stage and film designer, Oliver Messel.

After the war the house was restored at a considerable cost funded by Mr Sexton and reopened in 1950, again as a centre for entertainment and the arts.

In April 1995 a fire swept through the house, destroying the roof and the ceilings of the entrance hall, Music Room and restaurant. Much of the wooden panelling and the Georgian plasterwork were spared, however, and many of the contents, paintings and furniture, were salvaged. An eighteen month long restoration project culminated in the reopening of the house in November 1997.

Today the Assembly House offers a busy restaurant which serves breakfast, lunch, afternoon tea and dinner and, with the Theatre Royal just next door, is a popular venue for pre-theatre suppers. A selection of excellent function rooms and suites are used by numerous clubs and societies, and the House is an attractive venue for weddings and civil partnership ceremonies. The adjoining St Mary's House, previously used for staff accommodation, has recently been converted to offer eleven luxury bedrooms.

The Assembly House is one of the Norwich 12, a collection of twelve of the most iconic buildings in Norwich, with architectural styles spanning the Norman, medieval, Georgian, Victorian and modern eras.